How I won the fight for my life 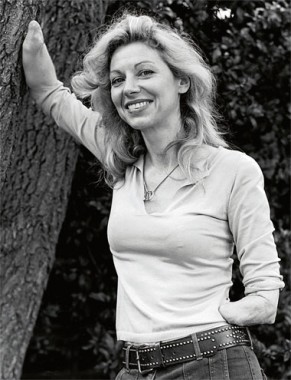 OLIVIA GILES was working as a lawyer in 2002 when she caught meningococcal septicaemia and had to have her hands and feet amputated to save her life. In 2007 she founded the charity 500 miles, which supplies prosthetic limbs to developing countries.

I began to feel ill one afternoon at work. It felt like a very bad cold, but by the next day my hands and feet were itching and I was freezing. By the afternoon my feet were covered in angry purple marks. Then I noticed them on my hands, which really made me panic. At the time I didn’t know what was happening, but they were symptoms of blood poisoning.

An ambulance took me to hospital, where the last thing I remember is my partner, Robin — now my husband — arriving. It didn’t occur to me that I was nearly dead — I didn’t think of saying goodbye. His head came round the curtain and I thought, “He’s here. I’m safe,” before slipping into a coma. I don’t remember anything after that until I regained consciousness four weeks later.

That first day they’d told Robin there was a fair chance I wouldn’t make it to the morning. My flesh was dying and my internal organs were struggling. Robin and my mum and dad were at my bedside, and over the next few days they could see creeping black on my limbs as they became gangrenous. They didn’t know how far up it would go. One evening the doctors told them they were going to have to amputate all four of my limbs, above the elbows and knees, and asked whether they should do that or switch off the life-support machine and let me go. My family decided I would be so dependent that it wouldn’t be much of a life. But the next day the plastic surgeon said he might be able to save my joints. That night was the lowest point. Considering how close I came to not making it through at all, everything after that has been something gained.

My first memories of consciousness are very confused. I was having terrible nightmares, where there was something wrong with my hands and feet. It took several days before the facts started to percolate in. I was trying to pick up a cup when I was first told about the amputations. A nurse had to stop me, saying: “Olivia, you can’t hold the cup, because you don’t have any hands.” And I thought: “That’s rubbish.” My limbs were covered in bandages — my hands could have been in there. I only realised what had happened very gradually.

The first time I caught a glimpse of myself, I thought: “Who’s that poor girl?” I looked tiny — I’d lost so much weight and was terribly pale. I had to learn to do everything again. At first, rolling over in bed was beyond me. I just concentrated on what I had to do that day: I think I knew on some level that contemplating the future would be too difficult. People were being nice to me, my family were there, and I was being fed. Things were quite easy in a lot of ways — I was getting plaudits just for breathing.

Every day brought a new skill. I was fitted with prosthetics so I could brush my teeth and put on my clothes. Going to the toilet independently was a cause

for celebration. The first day I took a step on my prosthetic legs without holding onto anything was overwhelming. I’d been learning to walk with support from a frame or from physiotherapists — then one day I thought: “I can do this. Let me try!” I managed a couple of steps. I was

euphoric — it felt like I was floating. I had to lie down and just lay there weeping. I realised I was going to be okay. I was going to walk out of hospital. Until I knew for sure that I would, I don’t think I had dared to hope for it, or acknowledge how important it was to me. I will never forget the profound relief and elation of that day. It was the beginning of a new life.

My life is so much better now than before the illness. I make a deliberate effort to seek out opportunities, and not to put things off. My experience hasn’t changed my personality, but I have learnt lessons. I still get uptight about silly, petty things, but now I can check myself and put them into perspective.

I made a conscious decision not to go back to my old job. Being ill made me realise that I hadn’t done a lot in my life other than carve out a nice career. I had effectively broken down my first marriage by working too hard, and I wonder if my relationship with Robin would have survived my work habits. But I absolutely regret not having any children — I thought I had plenty of time for that. I thought I had for ever.

I’m pretty independent now. I have various prosthetics for things like driving and cooking. I do depend on Robin for certain things in the house. Heavy things are difficult. But I can thread a needle and he can’t, so it works out. And I don’t think he sees me as disfigured any more.

I have been exceptionally fortunate. There are so many things that could have gone wrong — even losing one knee would have made life much more difficult. Remembering that I might not be here reminds me to wring the most out of the days I have. I will have fewer regrets about the five years since my illness than about the time before it.