We’re delighted that, for the second year running, Les Dickson has nominated 500 miles as the chosen charity for the Pipeline Industries Guild’s annual Scottish dinner, held in Glasgow. At the dinner, Peter Mitchell was on form as master of ceremonies and auctioneer, leading the fundraising drive and helping raise £7525.50 There are probably few people who understand our work better than John Eyley, Scott McNabb, Cosmo Born and Ryan Cassidy as they’re all studying prosthetics and orthotics at Strathclyde University. In September, they ran the Great Scottish Half-Marathon in Glasgow, raising £500. Given their professional understanding of what it’s all about, it’s great to have their support. For her 50th birthday earlier this year, Jane Hogarth decided that she didn’t want presents – and instead asked to be sponsored for her St Cuthbert’s Way challenge. Together with her team mates, Susan, Carolyn and Gerry, she completed the 62.5 mile walk which goes from Melrose to Lindesfarne in 8 stages. With donations from her friends, family and colleagues, Jane raised a phenomenal £4,000. (And when you hear that Jane wears a below-knee prosthesis as a result of an accident a few years ago, you should be extra impressed!) 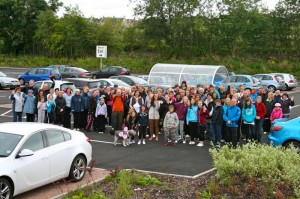 How do you walk 500 miles in one afternoon? Marion Orr had the answer – get around 100 people (and a dog) together and walk 5 miles each. The walk took place on a pretty damp day but everyone seemed to have a great time and the walkers were all smiles. Marion and her team did fantastically – raising almost £2,500, including £700 match funding from the Royal Bank of Scotland, organised by Louise Wood.

Marion heard about 500 miles at an achievement ceremony at Braes High School, which her children Caroline and Kenneth. attended. The School donated £525 to 500 miles this year, mainly raised through the sale of their yearbook. 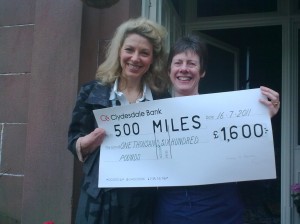 Rosalyn Barclay, a fellow meningitis survivor, generously held her birthday party in July for 500 miles – and what a party it was. On a Saturday night in Clarkston, the party featured everything you might expect, with food, drink, music and dancing, as well as plenty you wouldn’t, with a book sale, competitions, 500 miles cakes, a raffle, an auction and a raucous rendition of everyone’s favourite Proclaimers’ classic. The money rolled in. Rosalyn had hoped to raise as much as £500. In fact she raised over £1,600 – a fantastic achievement! John Starr, Euan Kidston, Robert Starr and James MacIntosh have taken the 500 miles message to heart. In June they did the incredible – and “walked 500 miles” from Edinburgh to London, collecting sponsorship of £1,167.75. It’s a remarkable feat – and especially kind as I wasn’t even aware that this was happening until they set up a Just Giving page and set off on a walk to help others who can’t – brilliant! Maureen Polson is a great friend of 500 miles. This year, she got together a 500 miles team for the Rob Roy Challenge – the flagship event for the Martin Currie Charitable Trust, which is one of 500 miles’ major supporters. The challenge is to walk and cycle 55 miles of the Rob Roy Way, individually or in relay. Maureen, together with Shona Gossart, provided support for the 500 miles team, made up of Jim Hiddleston as leader, Lesley Goodman, Raymond Trainer and Craig Beattie.

They made it through the rain, midges and punctures, to raise a triumphant £3,250 for the Martin Currie Charitable Trust. Maureen led the fundraising efforts by organising a large ceilidh and the team ran additional fundraising events including ‘swish nights’ (clothes swaps). 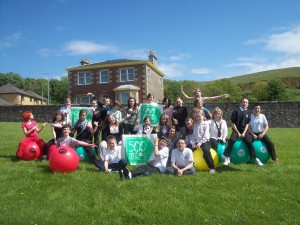 When Girvan Academy Guidance Teacher, Ellen Aitken, led a programme designed to build resilience in pupils – called Bounce Back – she decided to take it beyond the classroom. Not content with teaching the Senior 1 class techniques and lessons about bouncing back (we know a few stories like that from our patients), Ellen led the class in a sponsored bounce on space hoppers, raising £725 in the process. Kay and Mike Farley of the Rotary Club of Gryffe Valley hosted a barbeque at their beautiful home and garden in Houston. As the wine flowed and the meat sizzled – the wind blew! It turned out to be one of the windiest days in May that anyone can remember, which made life tricky in the marquees – but the rain mainly stayed off and the sumptuous buffet with lots of home cooking and baking, the good cheer and the excellent company kept everybody warm and smiling. This was the second time Mike and Kay have opened up their home for 500 miles but this year they and their Rotary Club surpassed themselves by raising a wonderful £1,618.25, more than double last year’s total. 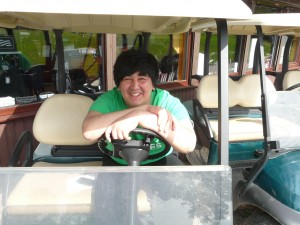 Every year, Kemnay Academy in Inverurie adopts a charity – and for the 2010/2011 session, running up to June, 500 miles was the lucky one. The year started off with the Jasmine Challenge organised by Jasmine Holdings, which offered a prize of up to £1,000 in match funding. The charity committee (led by Deputy Rector, Fran Jones) successfully presented its case for supporting 500 miles and its fundraising plans for the year and wowed the judges.

The committee went on to organise bag-packing, dress-down days, and a very impressive golf day for local business people which included a raffle and auction with the most amazing prizes – which must have taken some sourcing. Altogether over the year, Kemnay managed to raise an incredible £8,000 – so a huge thanks for all their efforts.

Kemnay Academy is kindly still collecting 5p pieces for 500 miles, aiming for a mile’s worth. I think this is a great idea but if anyone else likes it, maybe 50p pieces would be quicker….or is that just greedy?