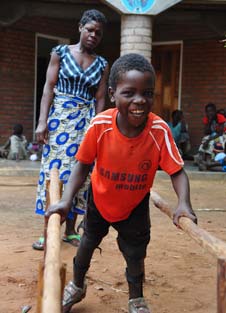 John Sankulani is 9 yrs old and has Cerebral Palsy. He was referred to us through a marvellous local Malawian charity called Development and Integration of People with Disabilities (DIPD) which works in the Mchinji area where John lives. DIPD promotes an inclusive society that adequately cares for, supports and protects the rights of people with disabilities so that they can realise their full potential and make a contribution to society as equal and dignified citizens.

If Evelyne’s name sounds familiar it is because she is the manager of the 500 miles Centre in Lilongwe. She also works for DIPD at the weekends.

When Evelyne first saw John he was very spastic and could not fully straighten his legs. She managed to get them straight after much physiotherapy and 500 miles made knee/ankle/foot orthoses (KAFOs) for him to wear at night to assist with keeping his legs straight. His mother has done a wonderful job in doing Johns’s exercises with him at home and by making sure he wears the KAFOs. 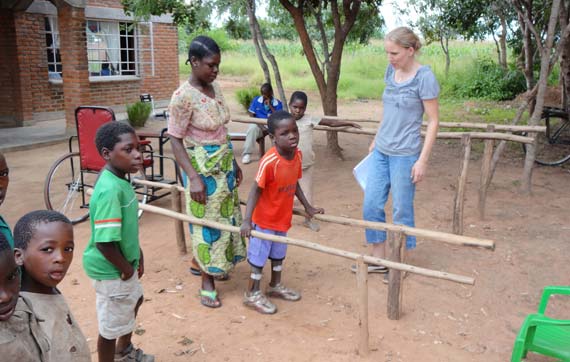 When 500 miles last went to John’s village, Chimteka, he had outgrown the KAFOs and it appeared that he no longer needed KAFOs and might be able to stand with only ankle/foot orthoses (AFOs) – so we made them – and here is a picture of him standing with them. The next step is trying to walk!