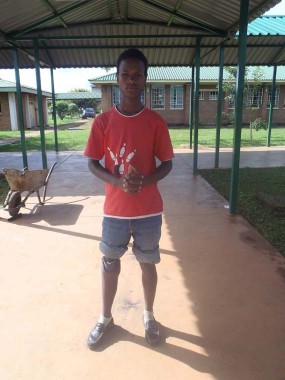 Robert Kamanga is 18 and still at school.  He lives in a remote part of the very north of Malawi called Usisya.  When he was a young boy he was attacked by a crocodile which left him with a below knee amputation. Robert lost his mother at a young age and his father is old and infirm and struggles to look after him.

A Malawian NGO called Temwa has been supporting Robert to give him access to an education. Robert was a very determined young boy, he would go as far as could on his crutches and at rivers and steep hills that separated him from his home and his school he would get his friends to carry him on their backs, so he would not miss a lesson.

Temwa first brought Robert to the 500 miles Centre at Kamuzu Central Hospital in June 2011 where he was fitted successfully with a below knee prosthesis. He used this device to get to school independently from that day forward. As the years passed the prosthesis became too short for Robert but due to the distance to Lilongwe and the cost of the travel, Temwa could not afford to take him back.  As soon as the 500 miles Centre opened in Mzuzu, Temwa brought him for fitting with a new below knee prosthesis provided by 500 miles. He is happy now that his legs are the same length again.  Watch him tackle the steps and bars in the video!