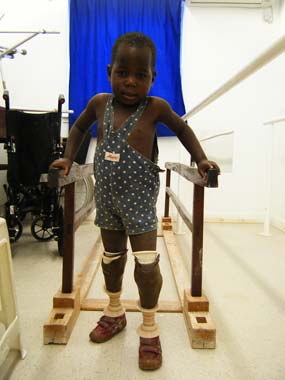 Tumalire Twaibo lost both feet before she was 1 year old. We believe the cause of her amputations was either cancer or, more likely, gangrene from infected wounds. She had prostheses fitted by the 500 miles Centre in Lilongwe in 2009 but did not come back for three years.

She’s 4 in these pictures and had not worn her previous legs for at least a year; they will have been much too small. When we first fitted these ones she refused to walk!  But with some encouragement (and biscuits) she started to stand. She requires the bars for support but we’ve given her a walker to use until she is strong enough. In the end she was very happy with her legs and loved watching herself walk in the mirror – so much so that she missed the end of the bar she was holding and fell over!  It’ll not be long before she’s running about!