Suzgaka means “problem” and that is what his parents named this boy! He was born with cerebral palsy which means he moves jerkily and has speech difficulties. During childhood he broke his arm which left him with a very contracted and stiff elbow and shoulder. Then in 2012, when he was working on the land, a thorn penetrated his leg deeply and caused infection of the bone, which in turn resulted in a trans-femoral amputation. From then on he was wheelchair-bound, unable to hop with crutches because of his palsy. 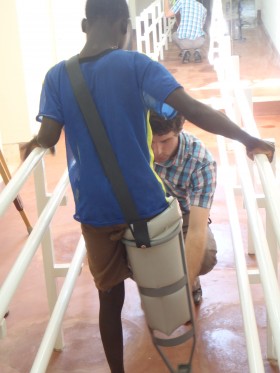 Aged 17, and by this point very weak, he was brought in a wheelchair to 500 miles in Mzuzu by his brother in June 2013. We were concerned that Suzgaka would never be able to use a limb but he was set some simple exercises to see if he could regain some strength. When he returned it transpired that, with his brother’s assistance and a lot of determination, he had done his exercises daily and could now stand and hop with the heavy use of the walking bars. Soon Suzgaka was using only one crutch to walk small hopping steps and his brother told us they no longer used the wheelchair for short distances and that the village couldn’t believe he was mobile. We were still worried that Suzgaka’s jerky movements would make a prosthetic limb a tripping hazard but we thought we should at least try him on the PPAM aid and amazingly his hopping and stepping improved with a few sessions. So the prosthesis was made for him and he has gone from strength to strength through his own determination and a combination of clever physiotherapy from our manager, Sam, and prosthetic expertise from his prosthetist, Dumisani.

Suzgaka’s gait is not elegant due to his cerebral palsy but as you can see from the video, he can walk and even climb stairs! Suzgaka’s personal goal is now to return to farming his field independently.

The team at 500 miles did not want to continue calling this young man “problem” so they nicknamed him “Jacob”, which means to supersede.