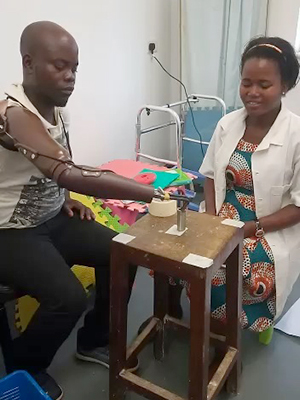 Silvester Mwatisiya is 28 and lives with his wife. He worked as a minibus driver as well as doing a little farming to supplement food at home. But in October 2018, he was involved in a road traffic accident in which he lost his right arm at the elbow – and consequently his job. After a long stay in hospital, resourcefully, he opened a shop selling groceries, but even that was challenging for him as it involved carrying goods and so he had to employ someone to assist with things like unloading delivery vehicles – an expense he couldn’t afford. He could still watch football, but he had to give up his farming activities as he couldn’t work alone and, naturally, he was finding daily life and ordinary domestic chores difficult.

Silvester came to be referred to 500 miles because a South African woman for whom he used to work found 500 miles on the internet. Silvester’s friend paid for his travel from Nkhotkota and for his accommodation in Lilongwe. When he arrived at 500 miles, Silvester was assessed and his elbow was cast so that Mwayi, his prosthetist, could make him a perfectly fitting socket. 500 miles then provided him with a mechanical arm to which he can attach both a functional hook which allows him to hold things and a cosmetic hand.

After training in the use of the functional device, Silvester became competent and he left us feeling confident that he would be able to handle and carry goods at his shop more effectively and to hold and use some farming equipment. He said he was very happy with his device!